Last week I lucky enough to be asked to do a workshop on the connection between Play, Tech and story at the 2015 Sandbox Summit.  This event generally takes place on the east coast with MIT as the educational partner.  This year, Play Science worked with the University of Southern California and held the two days of workshops, lectures and networking at the California Science Center.  It was a terrific way to keep current on what is happening at the intersection of new technology, media and education and more importantly to stay inspired by the quality of people who really do care about how children learn and play.

While there were many outstanding speakers, one of my favorites was from 9 year old Dylan Siegel who decided (at the age of 6) to raise a million dollars to help his best friend Jonah fight a rare liver disease.  Dylan wrote a book and with his family’s help has raised $1.2 million dollars! Take a look at his speech from the second day at Sandbox Summit.  Trust me, my speech was no where near as polished nor as moving.  And if you find his story and mission as compelling as I did, click here. 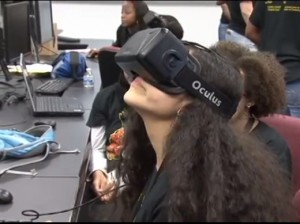 I was, however, also great relieved to find this gem of an article about a terrific computer camp for (real) girls  at the University of Maryland featuring VR gaming. These middle schoolers are learning how to create next level video games using technology like  Oculus Rift and Unity 3D.  I hope this means that more and more computer science labs and classes will be offering all kids an active way to participate in this latest round of VR creative madness.  As many of you know, VR has been available for some time now.  It seems to me, however, that since Facebook’s purchase of Oculus Rift there is a whole new level of creative and business interest.  I hope camps like these will get kids excited about what the future holds in education and entertainment. 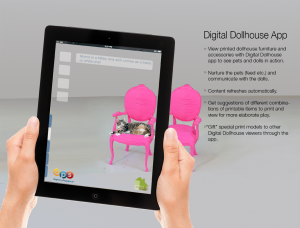 There is a new world of story magic out there! Imagine 3D printing objects (cool on their own) but then viewing them through the “magic glass” of your smartphone.  Suddenly the possibilities are endless as you view creatures, characters and otherworldly animations connected to the object you just printed.  Suddenly a virtual kitty is sleeping on your newly printed chair or a fairy is breaking free from the lantern you just printed.  Story, whether in the printers mind or viewed through augmented reality, is what makes these objects special and desirable.

The technology is there but the magic is waiting to be unleashed!

We question why there haven’t more advances in wearable tech now that the elements are so inexpensive and accessible.  Check out how the sensors are used here and the small micro-processor the designer Michelle Wu uses.  It is amazing to see how she taught herself via youtube how to make the dress.  At Nena Media, we’ve been talking about 3D printing with conductive ink and how that would work to add electricity to our toy designs.  Imagine if you could print a lamp and be able to add a little light bulb?

Watch our Digital Dollhouse video featuring girls creating their own dollhouse furniture. 3D printing is becoming a consumer reality.  Nena Media, however, believes that 3D printing will only catch on outside of the business sector if consumers can see the value of printing items in a natural context.  What better context then in the capricious world of toys where a girl may want to create a doll chair one day and a pair of shoes the next?

As the price of printers become more attractive and the hardware becomes more user friendly, 3D printing will no longer just appeal to the “makers” and “hobbyist” set.   We want to focus on creating a clear front-facing product where consumers can play with an item digitally, make a decision to either print or order the item, and then continue to play.  Rather than making items for existing 3D model catalogs, we see 3D printing as part of our play experience combining the instant gratification of online gaming with the physicality of real world toys.